Will There Be A ‘Good Omens’ Season 2? Neil Gaiman Gave Fans An Answer

Will There Be A ‘Good Omens’ Season 2? Neil Gaiman Gave Fans An Answer

Book adaptations for premium cable and streaming services continue to be all the rage this decade, especially those with a science-fiction or fantasy bent. One of the more highly anticipated adaptations for 2019 is coming via Amazon, with David Tennant and Michael Sheen starring in Neil Gaiman and Terry Pratchett’s Good Omens. According to the panel, the upcoming series has six episodes. But what fans really want to know is will there be a Good Omens Season 2? After all, American Gods, also by Gaiman, is being fleshed out into multiple seasons.

One of the odd offshoots of this era of fantasy and science fiction going mainstream in entertainment is books no one in their right mind would ever adapt are being adapted. This is partly Game of Thrones fault, as no one in their right mind would adapt something so sprawlingly expensive as A Song of Ice and Fire, and yet they did, and it was the biggest show on earth as a result.

Good Omens, like American Gods, falls into this unadaptable adaptations category. But STARZ, which airs American Gods, made the novel not only work but stretched out the story so the 450-page book would be about three seasons long. Good Omens is about the same length, so is Amazon planning to do something similar?

According to Gaiman, the answer is no. The project was never envisioned to go beyond a single season. In fact, the project only really happened because it was Pratchett’s dying wish for Gaiman to write a TV mini-series adaptation and get it made.

Terry Pratchett and I wrote the novel almost 30 years ago. We failed to get a movie made almost immediately. And then a few years ago, Terry and I thought it might be a good idea to try it as television. We went to looking for writers, and they all said no, it’s too big and too weird. And then Terry sent me a letter saying, ‘you have to [write] this because I don’t have very long to live, and I want to see it before the lights go out.’ And then he died much, much faster than any of us expected. And that was his last request, and so I’ve seen it through. 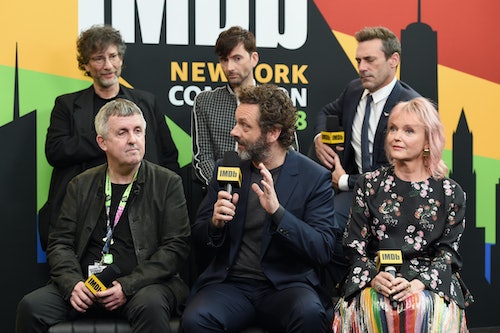 Gaiman said when he sat down to figure out the shape of the series, he decided the whole thing would fit into about six chapters. In the end, that’s what he stuck to. The series will be six episodes long when it arrives on Amazon, and there won’t be a second season.

As Gaiman put it:

Good Omens has a beginning, a middle, and an end…and then some more end.

Unlike American Gods which was conceived from the beginning as a project which was more able to be open-ended and stretchy, this story is not. Even if it does somehow turn out to be Amazon‘s next Game of Thrones, and Gaiman having signed to do more shows with Amazon, Good Omens will be a one and done series.