What Would Happen If Republicans Keep The House? The Stakes Are High

What Would Happen If Republicans Keep The House? The Stakes Are High

Just one day before the country heads to the polls in the 2018 midterm elections, statisticians and pollsters are updating their projections on a seemingly constant basis as to whether Democrats or Republicans will have control over Congress for the next two years, and in what chambers. Many of these polls are forecasting the House of Representatives to flip blue on Election Day, but nothing is set in stone yet. So what would happen if Republicans keep the House?

As of 11:30 a.m. ET Monday, Nov. 5, the most up-to-date projections from statistics website FiveThirtyEight show that Democrats have a greater than an 87 percent chance of winning the House. But in an interview with The Hill on Friday, Nov. 2, Vice President Mike Pence said he thinks the GOP will maintain control of the House. While this projection isn’t necessarily the likely outcome, it’s still a possibility.

Elite Daily spoke to Mark Peterson, a professor of public policy, political science, and law at the University of California, Los Angeles (UCLA) about what could happen. There are still two huge wild cards heading into Tuesday, according to Peterson what the Russia investigation might yield, and what will happen to the economy. But barring any massive bombshells, there are some reasonable predictions for what might happen if the House doesn’t flip blue this election.

Peterson notes that on the chance that Republicans are able to maintain a hold on the House, a lot could depend on how tight that hold is. “Much will depend on the size of the new majority,” he says by email. “A slender majority would mean that the Republicans would have to be extremely cautious about issues that divide their conference,” particularly health care and immigration. He notes that it would be an uphill battle for the GOP to repeal the Affordable Care Act (ACA), also known as Obamacare. “It would only be harder now, especially now that they have all run on the commitment of protecting people against pre-existing conditions.”

The two main changes to expect if the Democrats take the House are legislative showdowns and investigations by any of the numerous House committees, Peterson says. So if that doesn’t come to pass? Well, those outcomes may also evaporate. 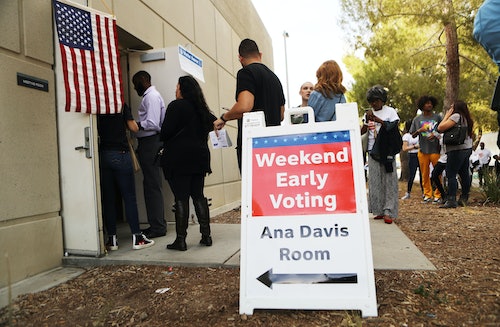 If projections prove accurate, and Democrats take the House and the Republicans keep the Senate, then a classic congressional gridlock likely will ensue, and legislative momentum on both sides will largely come to a standstill for the next two years, according to Peterson.

But if the GOP manages to keep the House and the Senate, it’s a green light for the Republican legislative agenda. The country could be in for two more years of a full-throttle push to advance some of the most controversial issues, taking advantage of the two-chamber majorities and a same-party president to sign off on new bills.

Of course, what kind of legislation they’re able to push through depends on how big a majority the GOP gets. But either way, he says, “the House is a majoritarian institution, so there is [little] the Democrats could do on any front, and President Trump would see little reason to work with them.”

In that case, Democrats would probably have to look ahead to 2020. Peterson says,

One thing to look for with a retained Republican majority is the popular vote for the House. It is entirely possible that the Democrats win a pretty solid majority of the popular vote say, 55% to 45% and still not gain a majority. If so, then Democrats will go into the next two years focused on translating their battles into good materials for the next campaign, and continuing to resist, at least rhetorically, the Republican agenda.

When it comes to the issue of impeachment, Peterson would also expect it to fizzle out. Numerous House Democrats, Reps. Maxine Waters and Al Green among the most vocal, have signaled a desire to impeach President Donald Trump and other notable federal officeholders (such as Supreme Court Justice Brett Kavanaugh). While a Democratic lawmaker could still introduce the articles of impeachment, since impeachment requires a majority in the House to proceed with trying a case, Democrats almost certainly won’t get the votes they need to move the impeachment to a trial in the Senate without having those seats.

“Impeachment, of course, would go nowhere, even with a slim Republican majority,” Peterson says. “That issue would be dead, unless the president strangles someone in the Oval Office. Even then, I’m not so sure.”

One caveat here: Special Counsel Robert Mueller’s investigation into the alleged ties between the Trump campaign and Russia is still underway and the results of that are still TBD. About three dozen people and entities, including several former Trump campaign officials, have already been swept up in his net, and some are predicting he’ll reveal more findings after the midterms. At this point, Mueller’s findings, and what they imply about high-ranking officials, is all a giant wild card. 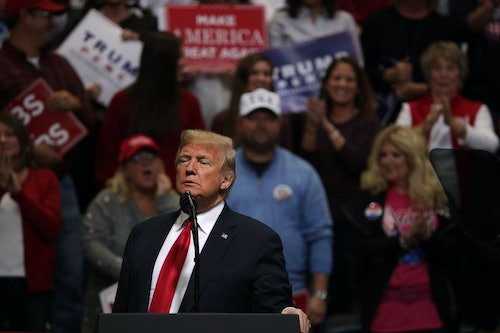 As House Oversight Committee Ranking Democrat Rep. Elijah Cummings said in a statement, if his party regains House control, they “would finally do what Republicans have refused to do, and that is conduct independent, fact-based, and credible investigations of the Trump administration.”

Certain House committees (such as the Oversight, Ethics, and Intelligence Committees) have the power to investigate everything from Russian involvement in the electoral process to alleged financial malpractice within the president’s inner circle. The majority party in the House usually determines the makeup of these committees so GOP House control would presumably provide control over any investigations that take place, including whether they take place at all.

In short, if the House bucks the predictions and stays Republican, the country could be in for a wild ride. If the country ends up with Republican-controlled Congress in both houses this time around, “President Trump will be truly emboldened,” Peterson says. “[This] may mean consistent with his norm-breaking approach to the office he chooses to really push the normative and constitutional boundaries of executive power.”

He summarizes, “Hold onto your hat and put on your seat belts.”