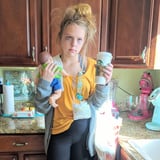 When 13-year-old Jillian debuted this year’s Halloween costume for her parents, her mom Lindsay Hartsock could not stop laughing. “It was so perfect,” she recalled. And she’d know – see, Jillian was dressed as a “tired mom,” and it definitely takes one to know one.

Jillian’s costume had every detail down pat – from the Uggs over control-top leggings to the messy bun – and her props were pitch-perfect. She had a burping baby in one hand, a Venti Starbucks in the other, a Target shopping bag (with a bottle of wine peeking out!) on her arm, and another kiddo in the form of a Cabbage Patch doll wrapped around her leg. The spit-up on her shirt and smeared mascara under her eyes only added to the look’s authenticity.

It’s safe to say that Lindsay, who has nine kids (we repeat: nine kids), was the inspiration behind this photo.

“Growing up in a big family, she has seen the blood, sweat, and tears that go into raising kids!” Lindsay told PopSugar. “Jillian sees me trying to manage our big, active family . . . plus she helps a lot so she knows exactly what it’s like to be a tired mommy – and sister!”

What made the costume even better is that Jillian found most of the essentials at home, and for what she needed to buy, she made like a typical exhausted mama and went to Target!

When Lindsay, who works as a professional photographer, took photos of Jillian in her costume: “I told her to smile in one, and she said, ‘I’m happy, but I’m a tired mom, so I have to keep this look so I don’t break character!'”

Although Lindsay assured us she was doing just fine, after seeing that spot-on costume, we still think she probably deserves a nap.