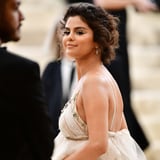 Selena Gomez brought plenty of gold and glamour with her Met Gala beauty look back in 2018, but unfortunately, she received a bit of criticism for it as well – specifically for her fake tan. Luckily, Gomez keeps her sense of humor during times like these.

Shortly after the event, the Only Murders in the Building star posted what appeared to be a response to the backlash on Instagram. “Me when I saw my pictures from MET,” Gomez captioned the post with a shrugging woman emoji. In the video, fans can see her in her Met Gala gown running away from the camera.

But that’s not all she had to say about the mishap. On Sept. 7, in a video for Vogue, the star opened up a bit more about that infamous night while doing her makeup. “Before I apply bronzer, let me tell you a funny story about a little self-tanner,” Gomez said in the video. She then went on to explain that for the big event three years ago, her team wanted to add a little color, so they applied a tanning lotion.

“It looked really beautiful and very even,” she said. “As the evening kept going on, it was getting a little darker and darker, and I didn’t notice it. And I’m at the Met Gala – basically one of the most prestige, beautiful events.”

Gomez didn’t notice the tanner had turned her skin “completely orange” until she sat down and looked at a photo of herself. After having a good laugh, she added: “I was like, ‘This is gonna be terrible because I’m gonna get eaten alive about this.'”

That’s how the video of her running out of the gala in her big, beautiful dress was created. “My first reaction was just to get the hell out of there.”

Pics of your night not turning out the way you’ve planned? We’ve definitely all been there.

Watch the full clip from the Vogue video ahead.