My Son’s School Made a No-Phone Rule For Parents, So Consider Us Rightfully Shamed

My Son’s School Made a No-Phone Rule For Parents, So Consider Us Rightfully Shamed 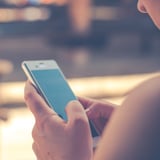 A couple of months ago, I attended my parent orientation at my son’s preschool. This wasn’t my first go-around at this particular school; in fact, it was my fifth (my daughter attended the school for three years, and this is my son’s second year). I basically only went out of mom guilt, feeling like I should make an effort since this is my last year as a preschool parent, but I certainly didn’t expect to hear anything new, and certainly nothing surprising.

At first, I was slightly offended. Was she saying that we collectively cared more about our Instagram feeds and incoming texts than our children? But her explanation made total sense.

I was pretty zoned out through most of the director’s speech, noting when she made the same joke about “don’t believe everything they tell you about us, and we promise not to believe everything they tell us about you,” which is totally true, but not quite as funny the fifth time around. Once she got to the rules portion of the program, I tuned in a bit more, knowing my son can be a bit of a handful. Yes, I knew preschoolers had to walk, not be carried, into school. And I knew the rule about no toys from home and the one about easy-off pants for potty breaks.

I was about to mentally check out again when she announced a new rule, one that did surprise me: parents would not be allowed to be on their phones at pick up or drop off. If the director saw you typing or scrolling away while waiting with or for your child, she’d ask you to put away your phone. Repeat offenders would be asked to hand over their phones while in the building.

At first, I was slightly offended. Was she saying that we collectively cared more about our Instagram feeds and incoming texts than our children? But her explanation made total sense. “You have just a few minutes before, but mostly after, school to connect with your preschooler. When they walk out of their classrooms, they’re dying to tell you about the craft projects they made, the games they played, the friends they sat next to, but after that few-minute window, they’re on to the next thing, and you’re going to get nothing from them.”

From experience (like I said, fifth year of preschool here), I knew she was right. I carpool with a neighbor to preschool, and on the days I pick up my son, he exits his classroom jabbering about all the details of his three-and-a-half-hour school day. Five minutes later, he’s already moved on to begging for a Happy Meal and trying to decide whom he should invite to his birthday party in three months. On the days when he’s dropped off at home by my neighbor 10 minutes after school lets out, I can barely get more than a “it was fun” out of him.

I Make My Young Kids Pay For Their Screen Time, and This Is How It Works

Of course, the truth of this small window should be something we parents discover on our own, as we engage with our kids before and after their school days, but the reality of daily life is that yes, many of us are guilty of being distracted during that window by our girlfriends texting to ask if we saw last night’s This Is Us. I know I’ve been that parent more than once.

The no-phones rule is a reminder of just how fleeting the time with our little ones really is, and how few the moments to connect with them about important things like learning the alphabet or developing friendships truly are. To soak them all in, I’ll put away my phone without complaint. I’m just happy someone reminded me to do so.