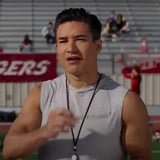 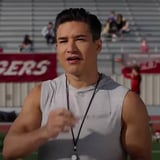 Are you ready to return to Bayside High? Well, it looks like we’re all one step closer after NBC’s streaming service, Peacock, released the Saved by the Bell reboot’s first teaser trailer on April 15. Mario Lopez and Elizabeth Berkley are back as A.C. Slater and Jessie Spano, with a twist. Yes, you’ll see Slater wandering the Bayside halls again, but this time he’s a gym teacher – Jessie and Zack Morris’s kids are the students!

Although Mark-Paul Gosselaar doesn’t make a cameo in this clip, we recently got a behind-the-scenes glimpse of his transformation back into Zack, now governor of California. The reboot picks up after Zack decides to close many low-income schools and send students to Bayside, instead. Aside from the original Saved by the Bell crew, the cast includes Josie Totah, Dexter Darden, Mitchell Hoog (as Zack’s son Mac), and Belmont Cameli (as Jessie’s son Jamie). There are still plenty of unknowns about the series – like a release date – but we’re just psyched to see this reunion become a reality.