Julia Roberts Talks About Her 1999 Red Carpet Armpit Hair: “The Picture Is Vivid in My Mind”

Julia Roberts Talks About Her 1999 Red Carpet Armpit Hair: “The Picture Is Vivid in My Mind” 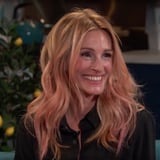 Some things stick with us forever, and for Julia Roberts, it was a 1999 red carpet moment. On Sunday night, the actress sat down with Busy Philipps for her new late-night TV show Busy Tonight, where the host raved about Roberts’s new Amazon Prime show Homecoming and how she’s been a longtime JR fan. Philipps wasted no time before asking the actress about the 1999 London premiere of Notting Hill where Roberts stunned in a red sequined dress, and flashed unshaven armpit hair while waving during an interview.

Well, Roberts is now revealing that it wasn’t a feminist declaration, but simply an accident. “I think I just hadn’t really calculated my sleeve length and the waving, and how those two things would go together and reveal personal things about me,” she said in the video, adding that the red carpet photo “is vivid in my mind.”

“It wasn’t so much a ‘statement,’ as it’s just part of the statement I make as a human on the planet.” More recently, celebrities like Paris Jackson, Lady Gaga, and Bella Thorne have ditched their razors in the name of feminism. Last year, a study conducted among 2,000 millennial women found that 87 percent agreed there’s “too much pressure on women to remove or groom body hair.” Watch Roberts’s interview with Philipps ahead, and see photos of the red carpet moment.

Julia Roberts Dyed Her Hair “Flamingo” Pink, and We’re Flocking to the Salon