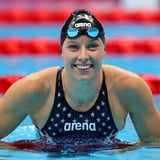 For Jessica Long, the most stressful part of the Paralympics came before she’d even set foot in Tokyo. She spent those days leading up to her departure anxious: afraid she’d contract COVID-19 right before she left or on the flight over. She stressed so much, the swimmer questioned whether she even wanted to compete. She couldn’t even set goals for Tokyo until she’d touched down safely and passed the battery of tests to clear her for competition.

“That’s when it really became real to me,” Long told POPSUGAR. “As soon as we landed in Tokyo, that’s when I was like, OK. I really want to bring home a gold medal.”

Finding Her Value Beyond Swimming

Long went into Tokyo as a four-time Paralympian and 23-time Paralympic medalist: the fourth most-decorated Paralympian of all time and the second-most in US history. Thirteen of those medals were gold.

Today, at 29, Long has the perspective to know that every color of medal is “incredible” and just making it to a Paralympic final is “really, really hard.” But for a long time, her mindset was different. It was more like, “I have to win the gold medal or I won’t be loved,” she remembered. “I won’t feel worthy. I won’t feel enough. And it’s really hard,” she added, “to tell yourself that that’s not true.”

Long tries to remember that, at the end of the day, “it’s just swimming.” She loves the sport, but “it doesn’t define me as a person.” When she spoke to some new Paralympic gold medalists in Tokyo, that came up as a running theme. “They’d be like, ‘I don’t feel any different,'” she said. “Exactly. You shouldn’t feel different. You’re still a person with or without that gold medal. It just represents the hard work.”

Long’s perspective on fitness has changed as well. “There was a time I used to focus on just being skinny, and now I really think about how can I be strong,” she explained. She embraces the strong lat muscles on her back (her favorite back move is the lat pull-down), an important muscle group for swimmers. As for her core, Long said she recently loved fitness YouTuber Chloe Ting’s two-week ab challenge, doing it for 60 days straight (!) with her roommate Julia Gaffney. “We would be exhausted, barely making it through the 10 minutes,” she said. The consistency was key, she said, and knowing that it was only going to be 10 minutes out of her day helped her make time for it. “I’m always really proud of myself after.” And if there’s one thing Long knows as an athlete and an amputee, and especially after the challenges of the past few years, it’s to never give up when things get hard.

Back in Tokyo, preparing for her busy meet, Long knew that winning one gold would move her into a tie for second-most Paralympic gold medals in US history with swimmer Erin Popovich. Long considers Popovich a personal hero; that goal was so lofty, and meant so much to Long, she didn’t even want to say it out loud.

Long won gold in the 200-meter individual medley, an event she has never lost at the Paralympics, to tie Popovich. Then she was on the winning team in the 4×100-meter medley relay, giving her 15 gold medals to surpass Popovich. She left Tokyo with six Paralympic medals total and a staggering 29 over the course of her career.

“I still really hope that if people see me doing all these things in swimming, they believe that they can do it too.”

As much as she loves the hardware and standing on the podium, Long’s favorite part of the Paralympics was hanging out with her suitemates (“Shout-out to room 710!”). “At the end of the day, no matter what my performance was, I knew that I could come back to our suite and they were just going to be there laughing and everything was going to be okay.” Her favorite race? That gold medal-winning 4×100 medley relay, which the US hadn’t won since 2004 and which featured a stunning last leg by Morgan Stickney to cement the gold. “I knew Morgan was going to do that because she chased me down in the 400 [freestyle],” Long laughed.

Inspiring the Next Generation

Long is already one of the most-decorated Paralympians of all time, with five Games now under her belt and at least one medal in every one. So what keeps her motivated to work for more? “I always said, as soon as I stopped loving this sport is when I probably will retire,” she said. After Rio, she took some time off to coach, give back to the sport, which renewed her passion. “I truly think that was what allowed me to keep pushing forward, to keep chasing my dreams.” Long is also part of Bridgestone’s Chase Your Dream Program, which supports adaptive sports organizations and encourage young adaptive athletes.

Giving back also helps Long see what her impact has been. “When I was 10 years old and I joined the swim team, it was already hard enough to be so different,” she said. As the only amputee on her team, “I would look around and I didn’t see anyone else that looked like me. That’s why I fell in love with the Paralympic movement.” It starts, she said, with people believing in you – and seeing for yourself that it can be done, because people like Long and her Paralympic teammates are out there competing and winning medals on the biggest stage.

“I still really hope that if people see me doing all these things in swimming,” Long said, “they believe that they can do it too.”

Get your Heart Rate Up With These Kickboxing Exercises!🔥 #rebeccalouisefitness #Shorts

13 Sinus Infection Symptoms That You Should Not Ignore