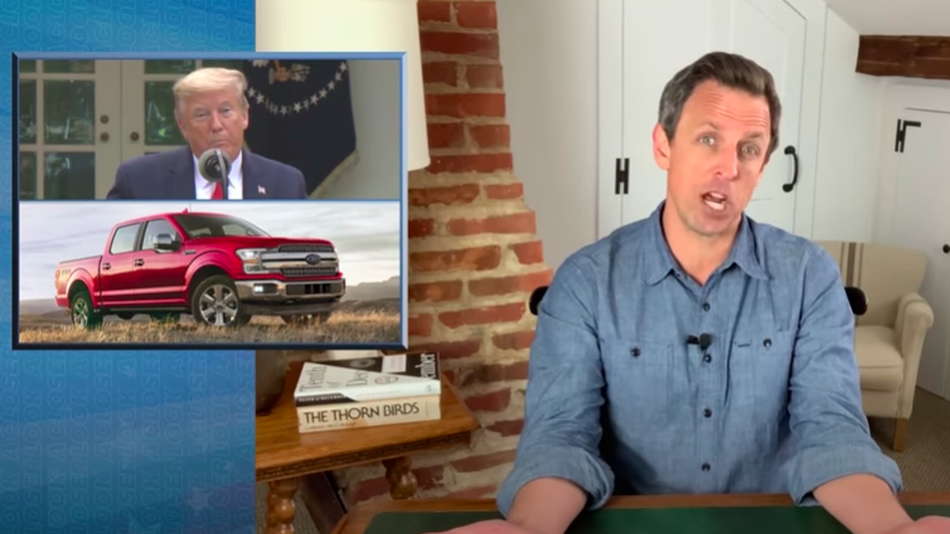 There are many things that are less than reassuring about Donald Trump being president during a pandemic that’s killed 25,000 Americans and counting. But one of them, noted Seth Meyers in Wednesday night’s A Closer Look segment, is the fact that he can barely seem to read his own briefing notes or teleprompter half the time. Trump’s briefings and press appearances are dotted with loooooong pauses before he just… makes up something vague and meaningless.

“He sounds like a guy on a date getting lines through an earpiece and the feed just cut out,” joked Meyers.

Once his brain sputters back into gear, Trump lately tends to resort to a basic trio of adjectives: “strong,” “powerful,” and “total.” (Classics like “bigly” doesn’t even get a look-in anymore.) As the footage assembled by the Late Night team shows, whether he’s trying to assert “total” authority over the states (nope) or openly lying about the “strong” action his administration took in the weeks before the pandemic hit the U.S. (absolutely not), he definitely doesn’t sound like he’s trying to compensate for anything at all. Read more…