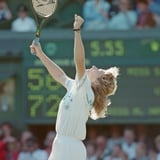 If an athlete claims victory in all four Grand Slams, otherwise known as tennis’s majors – the Australian Open, the French Open, Wimbledon, and the US Open – and also wins gold at the Olympic Games or Paralympic Games in the same year, all in the same event, that person achieves a Golden Slam, or a Golden Grand Slam. It’s about as rare as Willy Wonka’s golden ticket.

Players Who Have Won, or Almost Won, a Golden Slam

German player Steffi Graf won all four majors and gold at the Olympics in women’s singles in 1988. In fact, she’s the first player to have ever achieved a Golden Slam. However, American twins Bob and Mike Bryan achieved a non-calendar-year Golden Slam in men’s doubles by winning at the Olympics and the US Open in 2012, then the Australian Open, the French Open, and Wimbledon in 2013. It’s been dubbed the “Bryan Golden Slam.”

Graf’s 30-plus-year reign as the only person on the true Golden Slam list ended on Sept. 12. Dutch player Diede de Groot became the first athlete in wheelchair tennis to achieve a calendar Golden Slam with her victory in the 2021 US Open women’s singles wheelchair final. Previously this year, she brought home singles wins at the Australian Open, the French Open, Wimbledon, and the Paralympics. Her golden victory made her just the second woman in tennis to achieve this accolade.

You Will Love This Guide on How Tennis Scoring Works

On the men’s side, Australian Dylan Alcott’s win in quad singles at the US Open this year made him the first man across tennis disciplines to have won a calendar Golden Slam. Like de Groot, Alcott won at the Paralympics, then claimed titles in all four singles majors in 2021, but he competes in the quad division as opposed to the men’s wheelchair category (players with lower-body disabilities compete in the “open” division that’s split into women’s and men’s draws, and those with lower-body and upper-body disabilities compete in the mixed quad division).

What Is a Career Golden Slam?

A career Golden Slam occurs when an athlete wins each of the four Grand Slams and a Paralympic or Olympic gold medal over the course of their career. Andre Agassi, from the United States, and Spain’s Rafael Nadal have won career Golden Slams in men’s singles.

We’re eager to see what more golden potential awaits on the courts in years to come.