If you thought the drama surrounding the 2018 midterm elections was over, well, you were wrong. Not only are conversations regarding the outcome of the races still going on, but it’s been revealed that Florida didn’t count thousands of ballots in the midterms. Florida, WYD??

You should know that it’s not just some small number, either. Apparently, there are a stunning 6,670 ballots that weren’t counted in the races, according to a court filing submitted by the Florida secretary of state’s office on Dec. 7. Per the filing, the ballots weren’t counted because they arrived after Election Day even though they were mailed in before Nov. 6, reported The Hill. It’s unclear why the ballots didn’t make it to election offices on time or when they arrived. Elite Daily reached out to the Florida Department of State, which handles elections in the state, for further comment on the matter, but did not hear back by the time of publication. Current Florida law, however, says that ballots mailed inside the United States must reach election offices by 7 p.m. on Election Day in order to be counted. Ballots outside the U.S. are counted if they are received up to 10 days after the election.

The news comes after three Florida races went into recounts because the margins were so close. Those included a tight Senate race between Republican Gov. Rick Scott and Democratic incumbent Sen. Bill Nelson, the race for agriculture commissioner, and the gubernatorial battle between Democratic Tallahassee Mayor Andrew Gillum and former Rep. Ron DeSantis (R-Florida). Scott ultimately won the Senate race, defeating Nelson by just over 10,000 votes, according to ABC News. Gillum, who would have been the state’s first black governor, conceded to DeSantis after counties started reporting their recounts on Nov. 17. Though it doesn’t look like the uncounted votes would have made a major difference in the races, this still isn’t exactly good news to hear. 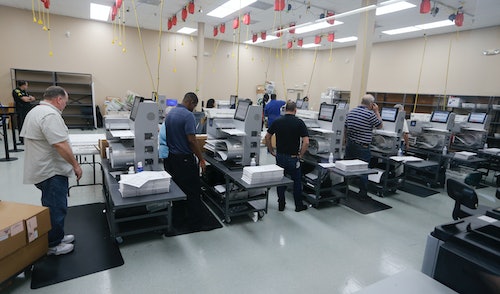 This is only one of many bombshell developments regarding the midterm elections, though. On Tuesday, Dec. 3, sources told Politico that emails from top officials of the National Republican Congressional Committee (NRCC) had been hacked during the election cycle. Elite Daily reached out to the NRCC for further comment on the reported hacking, but did not hear back by the time of publication. Reportedly, the accounts of four senior NRCC aides were “surveilled for several months,” which exposed “thousands of sensitive emails to an outside intruder.” While sources told The Washington Post that it’s unclear if a foreign government was behind the hacks, party officials, however, reportedly believe otherwise, reportedly telling Politico that they “privately” believe the hacker was a foreign agent thanks to the nature of the attack itself. Reports have called the hacker “sophisticated” and said their efforts were clearly designed to hide the tracks of who it was,” per the Post. The FBI is still investigating the matter, according to the report, so the outcome of that has yet to be seen.

Clearly, there’s been no shortage of drama in the weeks since the midterms, and if these latest moments are any indication, there’s a lot more on the way. Stay alert.