In 2018, it seems as if hurricanes are becoming increasingly destructive. Take Hurricane Michael, for example the most recent storm to hit the United States. While the National Hurricane Center predicted the storm’s path with high accuracy, as it got closer to making landfall, it quickly intensified into a Category 4 hurricane, with its 155 mph winds on the brink of Category 5 force, which poses the question: are hurricanes getting worse? Well, the answer isn’t all that reassuring.

If it seemed like the rapid intensification of Hurricane Michael was a surprise, that’s because it was. As The New York Times notes, it’s still very difficult for forecasters to predict how or if massive storms will rapidly intensify. Michael, which furiously slammed into the Florida Panhandle on Oct. 10, crossed over warm waters in the Gulf of Mexico (which has reportedly been warmer than usual for this time of year), thus turning the storm into a giant and extra-destructive storm. It’s one of a few major storms that have seemed to hit with devastating effects in the past few years, including Harvey, Irma, and Maria in 2017, and Florence earlier in 2018.

Dr. Timothy Hall, a Senior Research Scientist at NASA’s Goddard Institute for Space Studies, says in a phone interview with Elite Daily that yes, hurricanes in general are packing more of a punch. “Their hazard is getting worse for sure,” he says. He lists a few reasons that there’s more “stuff” in the way to be destroyed as construction in hurricane-prone areas continues; that sea levels are rising, meaning that there’s more water to get pushed around as hurricanes make landfall; and that wind speeds are getting stronger as the oceans warm.

“There’s a lot of good evidence and a pretty good consensus in the scientific community that [hurricanes are] also getting stronger, the wind speeds are getting stronger as the ocean warms,” he says. “Those three things together really are increasing the hazard.” He adds that though there aren’t more hurricanes forming, the ones that are have a much better chance of making land, where they’ll wreak their havoc. 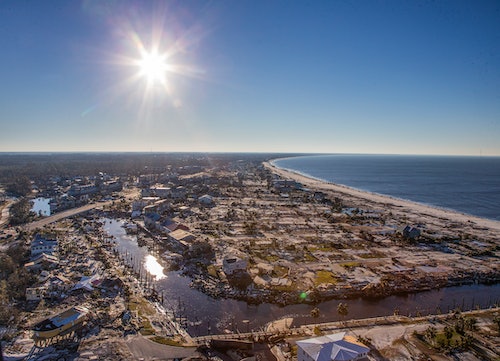 According to Hall, connections between climate change and devastating weather events are getting clearer as scientific modeling gets better. Thanks to attribution studies, which run detailed simulations of the storms over and over, it’s becoming possible to make an assessment of how much worse a given storm is than it would have been without climate change. “We can sort of see … how much more likely was the storm of that magnitude to occur, given the amount we’ve changed the climate,” he says. He cites 2017’s Hurricane Harvey, where he says studies found that 20-30 percent of the rain that the storm dumped on Houston, Texas could be attributed to climate change.

Just days before Michael made landfall, on Oct. 8, the United Nations Intergovernmental Panel on Climate Change (IPCC) released a report with a dismal assessment of our impending climate crisis. While climate scientists refrain from directly linking climate change to massive storms in the report, the theory is there: warmer climate will lead to stronger storms. Michael could have occurred 100 years ago, Adam Sobel, an atmospheric scientist at the Lamont-Doherty Earth Observatory of Columbia University, told The New York Times, but theres evidence that the probability of it is increasing as the climate warms. 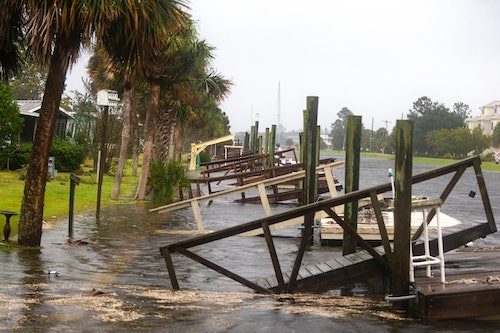 So, don’t expect these powerful hurricanes to end anytime soon. “The analogy is, it’s kind of like loaded dice,” Hall tells Elite Daily. There might be one major hurricane in any given season, or there might be six but climate change is tilting the odds. “It’s making it more likely that a six is going to come up than just one-in-six,” he says.

To combat the global temperature increase, the IPCC report suggested nations around the world take action to cut down on the greenhouse gases that are making the planet grow hotter. The temperature should reportedly be kept to a maximum of 1.5C. But while some nations have already pledged to cut down on their carbon footprint, President Donald Trump has been generally dismissive on the subject of climate change. As The Hill notes, he’s taken various steps to dismantle or weaken climate change regulations, such as repealing the Environmental Protection Agencys (EPA) Clean Power Plan, scaling back Obama-era greenhouse gas rules for cars and relaxing methane pollution rules for oil and natural gas drillers. Trump has also pledged to withdraw the United States from the Paris agreement a global effort that aims to curb climate change. Following the U.N. report’s release, the State Department said in a statement to the New York Times that the panel’s acceptance of the report did “not imply endorsement by the United States of the specific findings or underlying contents of the report.” The State Department did not reply to Elite Daily’s request for comment.

Though political leaders might be stalling on the issue, here are some ways that you can personally help combat global warming. Because at this point, anything helps.